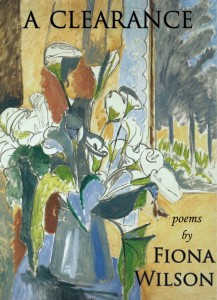 A Clearance
The Sheep Meadow Press, 2015

Do you remember the house at Inverey
and the day the pipes abruptly choked, then dried
to a whisper that expelled one final, peaty
drop? Truth be told, it was hardly aqua vitae,
though it might as well have been, what with
the unwashed breakfast dishes and wildish whiff
of wood-smoke that lingered neat about your hair.

And do you remember that ambitious affair, our
search for the hidden cause? “Will your anchor
hold,” you whistled, as I pled to be dowsed in the river
that helter-skeltered by our door. And how, from the hill,
when you showed me the evidence, the beautiful
remnants of the ancient Caledonian Forest,
it was a cuckoo we heard, reminding, reminding itself—

“… A mysterious guest who has never outstayed her welcome. Now, in A Clearance, there is a clear sense of just how substantial a poetry Wilson has been writing …”

“In this long-awaited and masterful debut, Fiona Wilson gives us astonishing and uncommon poems that may have emerged from the Scottish and American traditions but can be found somewhere in the middle of the Atlantic, while her readers come ‘to the edge of a question’ by either shore. Wilson’s formal brilliance is all worked through with chagrin, wit, and modesty.

“The mind at play in these poems is thrilled, distracted, enchanted by the feeling of words in the mouth— the gray wet velvet of ‘mizzle,’ the scandal of ‘cramasie’—and by slips and turns of phrase, which she turns over like stones, like coins, as they become talismanic—to console, perhaps, as if the secret to transformation were to be found in language itself.”

“Channeling birdsong, the hum of rivers, ‘the mad shush / of sound’ from the Highlands to the Hudson River, Wilson’s poems are gorgeous and perfected distillations.”

“Words that trigger other words – an electrifying personality without ego; free-spirited; free falling; a voice never heard before – true to herself— Fiona Wilson. I not only read this book, I studied it, rearranging the written elements so I can see how she does it…Page after page, simple, elegant, and new.”

“Fiona Wilson’s A Clearance is a stunning and highly original collection of poems that reminds us of the beauty and complexity of our human relationships. She does this with a lyric intensity that is softly muted by her good sense and gift for analysis. These are the poems of one who is wistful and wise and altogether brilliant.”

“And what a fine debut it is. Wilson’s work is intense yet expansive, particular but not overly self-involved. There’s plenty room for humour, too. Wilson delights in teasing multiple meanings from words in a manner that is fitting and controlled; she seldom goes for the cheap pun.

… Furthermore, the poems have a largeness of spirit and an inventiveness that goes beyond introspection.”